From wiki.openmod-initiative.org
Jump to: navigation, search

In August 2015 the four institutes RLI, ZNES, Next Energy and IWS (Uni Magdeburg) started a modelling project called "open_eGo". Apart from developing an open source model for the German electricity grid a main objective of the project is to develop an OpenEnergy modelling platform that provides the possibility for modelers to work together on models, to exchange themselves about models, to find open source models, to define quality criteria and plausibility checks, and much more which is constructive for a scientific exchange about energy system modeling.


Guido guided a breakout group about that at the openmod workshop in London to start the discussion about the composition, the requirements and the organisation of the platform. The results of the breakout group are here. One main result was, that it should be closely connected with the openmod website or even better be a part of it.


This input was considered for the first suggestion for the configuration of the platform which was the basis for the discussion of this workshop. The different elements can be summariesed as: 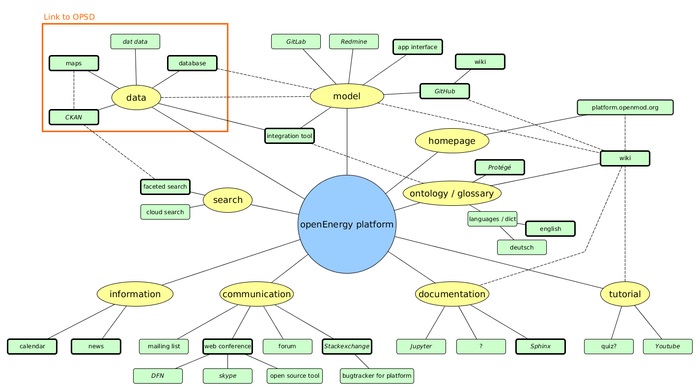 (The options in the green boxes with the thin edges have been discussed, but are not planned to be implemented.)

The following text is the summary of the results, not of the whole discussion! The discussion was along the whole scheme which was later adjusted to the outcomes.

It was pointed out, that it is necessary to make the benefits of the platform clear (e.g. introduction into energy system modelling, common coding rules / guidelines, an "energy system modelling"- glossary (that was discussed in several breakout groups in the last openmod workshops), model results in a certain shape, place for discussions and central data storage and visualisation, common (benchmark) dataset / library, Exchange of code snippets / how tos).

The three main discussion points were the representation of the models, the availability and form of data and the form of communication.

The extension of the already existing presentation of the models in the openmod wiki (factsheets) is intended.

Good communication with the project "open power system data" (OPSD) is necessary to avoid double work. Wolf will keep an eye on that as he is involved in both projects.


The discussion on how to save data on the platform couldn't be finished. The four discussed possibilities were

Continuous integration of new datasets, meaning automated tests and comparisons of their results with the results of a simple reference dataset, is planned.

The majority was against inplementing a forum into the platform for the discussion of various subjects. Reason: Nobody knew a good working forum; It needs a lot of time for moderation to make work well.

Options for a Q&A site:

Closed questions could be summariesed and written into the openmod wiki.

A discussion concerning a subdomain on Stackexchange was started on the openmod mailing list by Martin Glauer on October 20th.

Channels of communication and information can grow organically and might stay empty when they are designed and not developed by the active community. The glossary will probably not grow organically. Therefore, the process could be supported.

Name of the Platform

Is the planned OpenEnergy platform a platform or a portal? Also the name is not yet fixed … until the final decision we call it openEnery Platform (OEP).

The scheme of the platform has been updated according to the discussions of the workshop (see figure "Concept of the OpenEnergy platform (October 20th, 2015)"). 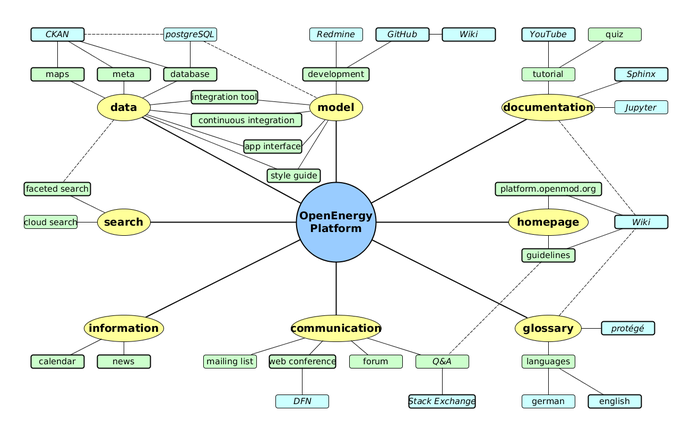 A reduction of the scheme has been made later on.

The first version of the platform will be developed until January / February 2016. Then it will be tested, discussed and adopted. The release of the first official version is schedule for April / May.

Partners of the project open_eGo are:

The project is supported by: